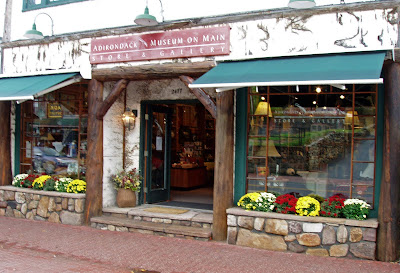 The Adirondack Museum in Blue Mountain Lake has announced that it will close it’s satellite retail store in Lake Placid on October 30th. The store, which opened in 2003, was an initial step in the museum’s long-range plan to reach out to communities in the Adirondack Park. Lake Placid was considered by museum officials to be the best place to begin.

&#8220The subsequent and continuing economic downturn have forced a strategic re-thinking of the museum’s plans,&#8221 Adirodnack Museum spokesperson Katherine Moore told the press in a recent announcement. &#8220At the present time it is no longer feasible to operate two retail operations and maintain a growing online sales presence.&#8221 The museum will concentrate its efforts and financial resources on the Blue Mountain Lake campus Moore told the press.

It’s the second set-back for the Adirondack Museum in Lake Placid. In June of 2008, the museum ended its plan to erect a building on Main Street to house a new branch of the museum and its existing store. That decision was made &#8220very reluctantly&#8221 museum officials said, citing a strained economic situation.

Last year, Adirondack Museum Marketing Director Susan Dineen told WNBZ that they were feeling the effects of the recession. “Like many large nonprofit institutions, our endowment has seen a downturn,” she told Chris Morris, “It’s unavoidable.” Dineen said today that the museum has not yet instituted a museum-wide hiring freeze or any layoffs. However, three employees at the Lake Placid store have been notified that their positions will be eliminated.

The Adirondack Museum’s economic travails are part of wider trend for local historical organizations. First Fort Ticonderoga faced financial ruin after Deborah Mars, a Ticonderoga native married to the billionaire co-owner of the Mars candy company Forrest Mars Jr., bailed on her long-time support for the fort just before completion of a new $23 million Deborah Clarke Mars Education Center. The Mars paid for nearly all of the new building’s construction but left before it was finished leaving Fort Ti about two million dollars in debt.

Then there was the well-publicized New York State Historic Site closure debacle that threatened the John Brown Farm in Essex County and the Macomb Reservation State Park and Point Au Roche State Park, both in Clinton County.

The long-awaited preservation of Rogers Island in Fort Edward is on hold after preservation funds dried up in July. Earlier this month, Governor David Paterson vetoed a bill that would have funded the celebration of the 200th Anniversary of America’s Second War of Independence, the War of 1812.

The news about the Adirondack Museum’s retreat was not the only troubling local museum news this week. The Lake Champlain Maritime Museum (LCMM) abandoned its plan to occupy a 7,000 square foot former generating plant on the Burlington waterfront. The LCMM had planned an installation of the museum’s collection of historic shipwrecks.

“The City of Burlington has done an outstanding job putting together a sound plan for redeveloping the Moran site, but the Maritime Museum has significant concerns about our ability to raise sufficient funds to participate in the project and the long-term financial sustainability of a future Moran maritime museum site. We felt our continued participation in the project, given our funding concerns, was not helpful to the City in meeting their overall goal of redeveloping the Moran site,” Art Cohn, Executive Director of the Lake Champlain Maritime Museum, announced.

Photo: The Adirondack Museum’s store on Main Street in Lake Placid. Photo courtesy Sarah and Marc Galvin, Owners of The Bookstore Plus in Lake Placid.