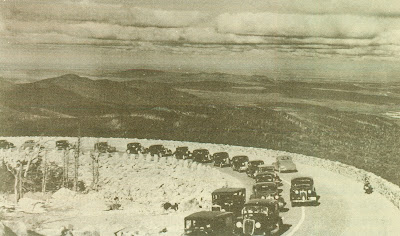 The Whiteface Veterans Memorial Highway, in Wilmington, N.Y., turns 75 tomorrow, Tuesday, September 14th. Whiteface, its staff and the town of Wilmington, will celebrate the occasion by rolling back prices to $1 per person, the same rate as it was in 1935. And since the Highway is dedicated to all veterans, they will be admitted free.

Once at the top, guest will have the opportunity to enjoy historical displays at the castle, a specially priced barbeque, and at 1 p.m. a ceremony which will include the reading of then-President Franklin D. Roosevelt’s speech, which dedicated the highway to all the fallen veterans of World War I. Other speakers will include New York State Olympic Regional Development Authority (ORDA) president/CEO Ted Blazer and Town of Wilmington Supervisor Randy Preston.

Opened to automobile traffic July 20, 1935, the Highway “officially” opened with a ribbon cutting ceremony, Sept. 14, 1935 which was attended by President Roosevelt, who was New York’s Governor when ground was broken for the eight-mile long stretch of roadway. During the ceremony, the United States’ 32nd President dedicated the highway to all the fallen veterans of the “Great War,” but in 1985, then-New York Governor Mario Cuomo re-dedicated the highway to all veterans. It has recently been slated for upgrades.

Whiteface Mountain is the fifth largest peak in the Adirondack Mountain range and it’s the only mountain in the Adirondacks that offers accessibility by vehicle. Today, from mid-May to early-October, visitors to the area can take a drive or cycle up the five-mile long scenic highway, from the toll booth to the top. Along the way there are scenic lookout points and picnic areas where visitors can stop and enjoy views of the Adirondack region.

Once at the top of the 4,867-foot high Whiteface Mountain, guests can enjoy a spectacular 360-degree, panoramic view of the region, spanning hundreds of square miles of wild land reaching out to Vermont and Canada. Guests can also visit the castle, built from native stone, where they will find a gift shop and restaurant. For those who are unable to reach the summit on foot, an elevator is available that will take guests the final 26-stories to the summit’s observation deck.

The Whiteface Veterans Memorial Highway was also listed in the National Register of Historic Places in 2008.