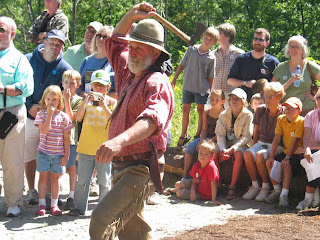 The grounds of the Adirondack Museum at Blue Mountain Lake, New York will become a lively 19th century tent city with an encampment of American Mountain Men interpreting the fur trade and a variety of survival skills this weekend, August 20 and 21, 2010.

The group will interpret the lives and times of traditional mountain men with colorful demonstrations and displays of shooting, tomahawk and knife throwing, furs, fire starting and cooking, clothing of both eastern and western mountain styles, period firearms, and more. This year’s encampment may include blacksmithing as well as a beaver skinning and fleshing demonstration.

All of the American Mountain Men activities and demonstrations are included in the price of regular Adirondack Museum admission. There is no charge for museum members. The museum is open daily from 10:00 a.m. until 5:00 p.m.