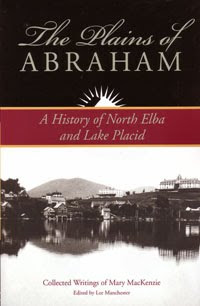 Jay (Essex County) author and editor Lee Manchester has published a number of volumes on the history of Essex County and its communities. The free, downloadable PDFs include five volumes compiled from the files of the late Lake Placid public historian Mary MacKenzie, a two-volume definitive anthology of 19th and 20th century materials on the McIntyre iron works and the Tahawus Club colony in Newcomb, better known as &#8220the Deserted Village,&#8221 and two collections of Lee’s stories about history and historic hikes in and around Essex County.

For complete information, including download instructions, visit the Wagner College website. Print versions of all the volumes can also be ordered, at a cost that includes no markup, with the exception of Mary MacKenzie’s &#8220The Plains of Abraham: A History of Lake Placid and North Elba&#8221- royalties for print copies of &#8220Plains&#8221 go to the Lake Placid Public Library, which maintains the Mary MacKenzie Historic Archives.