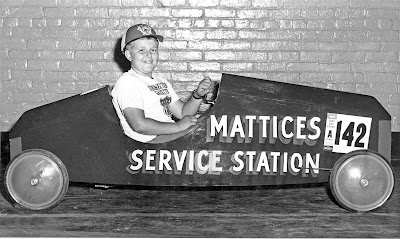 Seventy years after the debut of Albany’s first Soap Box Derby, the New York State Museum will mark the occasion with the opening of a small exhibition on the Derby June 8, followed by an awards ceremony at the Museum in conjunction with this year’s Albany competition. “Derby Doings: The All-American Soap Box Derby,” will be open in the Museum lobby until August 15.

The annual Capital District Soap Box Derby competition will be held in front of the State Museum on Madison Avenue on Saturday, June 12th and Sunday, June 13th. The awards ceremony in the Museum’s Huxley Theater will immediately follow Sunday’s races at approximately 5 p.m. The winners in three divisions will advance, all expenses paid, to the World Championships in Akron, Ohio later in July.

The exhibition traces the history of the Derby to the summer of 1933 when Dayton, Ohio Daily News photographer Myron Scott saw three boys racing down the hill and proposed what he expected would be a one-time competition. Nineteen children showed up and Scott was compelled to arrange for another competition on August 19, 1933. Intensely publicized, the event attracted 362 contestants and about 40,000 spectators.

The first national championship which Scott called the All-American Soap Box Derby was launched the following year with promotional and financial support from newspapers, magazines and Chevrolet. In 1935, the Derby relocated to Akron, Ohio.

Albany’s first competition dates to 1940 when 15,000 people watched 100 boys compete in the first races on Clermont Avenue. The Derby was locally sponsored and promoted chiefly by Chevrolet automobile dealers and the Albany Times Union. Ongoing support from both allowed such large events to continue through the 1940s. The Derby was televised by WRGB in 1949. Racing continued off and on at various locations, with different sponsors, until it ceased in the 1970s.

However, the Albany Derby was revived in 2006, managed by Ginger Miller. Boys and girls, ages 8-18, are now invited to participate.

The Derby was also held in Schenectady at one time. Richard Russell built two cars – one in 1948 and the other in 1949 &#8212- for the annual races on Fehr Avenue in Schenectady. He constructed both of his cars in a building at the Mattice service station and Mattice Fuel Oil service facility at 1025 Altamont Ave. in Schenectady, a business dating from the 1920s. It is still operated by the Russell family, including Richard Russell and his son, Richard Russell Jr., who donated the Russell car to the State Museum in 1995.

The 1949 Russell car will be on display in the exhibition, along with a contemporary Super Stock model built by Michael Morawski in 2007. He won with it on Madison Avenue in 2008 and went on to compete in Akron later that summer. Visitors can also see a helmet worn by Russell at the Schenectady races in 1948 and 1949, a trophy won by Donald Matthews in the Albany derby in July 1941, and several photographs that appeared in the Times Union and Daily Gazette in Schenectady.

Photo: Richard Russell in his car that is on display in the New York State Museum exhibition “Derby Doings: The All-American Soap Box Derby.” This photograph was used in a Mattice ad which appeared in the Schenectady Gazette on July 30, 1949. (Courtesy of NYS Museum)