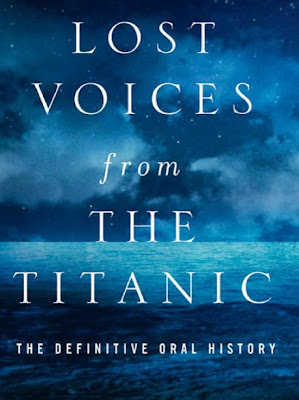 On April 15, 1912, the HMS Titanic sank, killing 1,517 people and leaving the rest clinging to debris in the frozen waters of the North Atlantic awaiting rescue. In a new Oral History of the disaster, historian Nick Barratt provides a narrative of the disaster in the words of those involved &#8212- among them the designers and naval architects at the White Star Line- first-class aristocratic passengers and the families in third class and steerage- and the boards of inquiry.

Lost Voices from the Titanic: The Definitive Oral History combines tales of folly and courage. Barratt has gathered the aspirations of the owners, the efforts of the crew, and of course, the eyewitness accounts from those lucky enough to survive. Barratt was lucky enough to interview the last surviving passenger of the Titanic about the way the disaster had shaped her life.

The majority of the book however, relies on letters, newspaper articles, memoirs, correspondence, and a few large collections, such as those collated by the historian Walter Lord. In part because the work rests on the words of witnesses rather than a technical account of the sinking, the book uses a surprising amount of original heretofore unpublished material.

Nick Barratt is a columnist for the Daily Telegraph and writes for Ancestor magazine. He is a director of Firebird Media and is on the National Executive Board of the Federation of Family History Societies. He lives in London.