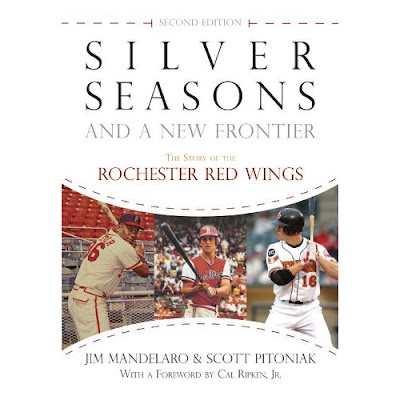 Taking us back to the early nineteenth century, when baseball was played in the meadows and streets of Rochester, New York, Silver Seasons and a New Frontier: The Story of the Rochester Red Wings retraces the careers of the players and managers who honed their skills at the city’s Silver Stadium and later at Frontier Field. The many greats who played for the Rochester Red Wings—Stan Musial, Cal Ripken, Jr. (who provides the book’s forward), Bob Gibson, Boog Powell, Jim Palmer, Eddie Murray, and Justin Morneau are among those brought to life in this story rich with quirky performances and poignant moments.

Silver Stadium opened in 1929, as Red Wing Stadium, in the middle of a thriving urban residential neighborhood which later fell into decline. In late 1956, the St. Louis Cardinals, then the major league affiliate of the Rochester Red Wings considered abandoning the franchise. In response, Morrie Silver, a Rochester businessman, spearheaded an effort to purchase the team and the stadium was renamed Silver Stadium in 1968. Although renovated in the 1980s, the desire for corporate suites and better parking led to the construction of Frontier Field, a new stadium located in downtown Rochester, which opened in 1996- Silver Stadium was demolished the following year is now an industrial and office park.

Silver Seasons tracks the history of the two stadiums and the teams that played there and in the process recalls moments like the longest game in pro baseball history, a thirty-three-inning affair between the Red Wings and the Pawtucket Red Sox that stretched from April to June. Highlights also include one of the greatest teams in minor league history, the 1971 Junior World Series champion Red Wings, homers hit by Estel Crabtree in 1939 and Jim Finigan in 1961 and the unlikely Red Wings championship in the first season at their new park in 1997.

About the Authors
Jim Mandelaro has covered the Rochester Red Wings for the Democrat and Chronicle since 1991. He has twice been honored as Sportswriter of the Year by the Rochester Press-Radio Club. He was inducted into the Frontier Field Walk of Fame in 2007.

Scott Pitoniak is the author of ten books, including Memories of Yankee Stadium. He was inducted into the Frontier Field Walk of Fame in 1999 and the Newhouse School of Public Communications Hall of Fame in 2000.