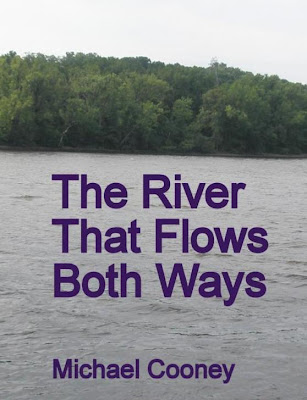 The earliest known written record of travel in the New York interior west of the Hudson River appears on an early map of Nieuw Nederlant (New Netherland). In 1614 a trader named Kleyntjen went west to the Mohawk along the river that now bears their name and then turned south along the Susquehanna River. If he or those who followed ever kept journals they haven’t survived, and it’s believed any records of early travels may have been tossed out when the Dutch West India Company archives were purged during a reorganization in 1674. Michael Cooney’s novel The River That Flows Both Ways recaptures some of that time, of Dutch traders, native Mohican and Mohawk people, and the fur trade that held them together in commerce.

Cooney’s novel is based on the one very early New York travelogue that has survived since the first half of the 1600s. Written by Fort Orange (Albany) barber-surgeon Harmen Meyndertsz van den Bogaert, it had somehow fallen into private hands and was discovered in an attic in Amsterdam, New York in 1895. His small party, which also included two other Dutchmen (Jeronimus dela Croix and Willem Thomassen) left in the middle of December 1634 in an effort to reach the Oneida tribe and renegotiate the price of beaver. They Oneida had nearly abandoned their trade with the Dutch in favor of the French to their northwest and Van den Bogaert, at the age of 23 was sent to correct the situation in favor of the Dutch.

The journey last six weeks and according to Van den Bogaert took them nearly 100 miles to the west-northwest of Fort Orange where he spotted the Tug Hill Plateau – a harrowing journey to say the least. Van den Bogaert experienced much generosity from the Native People he met in his travels and in 1647, when he was charged with Sodomy committed with his black servant Tobias, he fled to the Iroquois he had visited thirteen years earlier- he was captured in an Indian storehouse by a Rensselaerwyck employee named Hans Vos and in the ensuring struggle the building was burnt down. Van den Bogaert was taken back to Fort Orange but escaped &#8211 as he fled across the frozen Hudson River the ice broke beneath him and he was drowned. That incident serves as the climax of The River That Flows Both Ways.

Cooney, who writes the Upstate Earth blog, tells the story through the eyes of a young Mohican boy in a time when European diseases and war were creating chaos in the local native cultures. Using his wit and imagination, he wins over the Mohawk and finds a home with van den Bogaert. The novel brings together other historical characters like Arent van Corlaer, Adriaen van der Donck, and Isaac Jogues to weave a tapestry of life in the in the first half of the 17th century in the Upper Hudson and Mohawk valleys.

One thought on “The River That Flows Both Ways: New Netherland Novel”