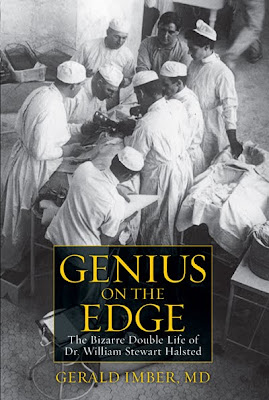 In April 1882, on a kitchen table, a doctor worked feverishly over a jaundiced 70-year-old woman. He had determined that she had an infection of the gallbladder and that only emergency surgery could save her life. Dr. William Stewart Halsted performed the successful surgery &#8211 the first known operation to remove gallstones &#8211 and brought his mother back from the brink of death.

Dr. Halsted, considered a father of modern surgical technique, was also a man with a raging cocaine and morphine habit. Born in New York City just before the Civil War, Halsted introduced the fundamentally important use of sterile gloves, surgical anesthesia, the residency program every medical student undergoes, the mastectomy, the hernia repair, local anesthesia and contributed towards important advances in thyroid and vascular surgery.

According to the publishers of a new book on this intriguing doctor, &#8220Every single hour, of every day, across the globe, caregivers of every type are using the methods of Dr. Halsted.&#8221 Unfortunately, they also call him &#8220a real life Dr Jekyll and Mr. Hyde&#8221 whose &#8220tale of brilliance and the bizarre&#8221 is told by Gerald Imber, MD, in Genius on the Edge: The Bizarre Double Life of Dr. William Stewart Halsted.

Imber goes to great length to immerse the reader in the look and feel of New York life during the later part of the 19th century, and there is plenty here to placate those interested in medical history. The book’s failure to understand the real workings of drug use in the period &#8211 here cocaine and morphine &#8211 leave the reader wanting more, particularly from a book which touts that drug use as &#8220bizarre&#8221. To be sure, Imber, the author of several books and articles who appears regularly on network TV, has crafted a readable biography of William Stewart Halsted. His portrayal of Halsted’s habit however, suffers from tired and worn stereotypes.

Halsted was born in New York City in 1852, a time when only half the children born in the United States would live to the age of five and more New Yorkers were dying from disease each year than were being born.

In 1874, Halsted enrolled in Manhattan’s College of Physicians and Surgeons, which like all medical schools of the day, was a business, and basically a trade school. Students chose whether to attend lectures or not- no laboratory or clinical work was required. Halsted, however, sought out the best teachers and worked diligently, ultimately focusing on anatomy and surgery- dissecting and studying his extra cadavers beyond the levels required of students.

Halstead was quick to recognize the anesthetic possibilities of an exciting new drug, cocaine alkaloid, which Sigmund Freud began experiments with in early 1884. He experimented by injecting himself at first and then used cocaine successfully for dental surgeries. Halsted then tried morphine which was used to relieve anxiety, nervousness, and sleeplessness and as an antidote for alcoholism and became slowly addicted to both drugs.

Unfortunately, the book does not provide adequate context for the use of cocaine and morphine in the late 1800s. For example, in 1885 Parke-Davis sold cocaine in various forms and promised it would “supply the place of food, make the coward brave, the silent eloquent and &#8230- render the sufferer insensitive to pain.” It was sold in neighborhood drugstores and its use was encouraged for laborers and even by Ernest Shackleton and Robert Falcon Scott who took cocaine with them to Antarctica. It wasn’t until 1903, when the American Journal of Pharmacy argued that cocaine abusers were mostly “bohemians, gamblers, high- and low-class prostitutes, night porters, bell boys, burglars, racketeers, pimps, and casual laborers,” that attitudes about the drug began to change. The book would have been served well by putting the broader context of shifting public perceptions, based on race and class, into the biography of a man described in the subtitle as living a &#8220bizarre double life.&#8221

Although the focus is somewhat misdirected to an out of context connection to Halsted’s drug use, Gerald Imber’s Genius On the Edge shows in fascinating detail a time when sanitary practices were unknown. Doctors performed surgery with unwashed hands and the ubiquitous wound infections made elective surgery rare. For modern readers, descriptions of the hospitals and procedures of Halsted’s day are the truly bizarre and terrifying story. It was Halsted who was responsible for the transition to modern surgery. Scrub suits and sterile rubber gloves began in his operating room, along with his operations for breast cancer and hernia- he made local and spinal anesthesia a reality and was a pioneering vascular surgeon and endocrine surgeon. So great a surgeon was Halsted, that he was mentor to many of the greatest surgeons in history, including Harvey Cushing and Walter Dandy, the fathers of neurosurgery. Perhaps the focus on his personal foibles is only the work of overzealous publishers trying to find an angle, but it detracts from the work and life of highly successful and innovative man who used drugs for over 40 years to aid his brilliant career.