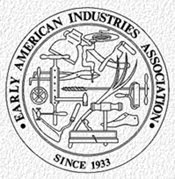 The Early American Industries Association (EAIA) has announced a $6,000 Research Grants Program to provide grants to individuals or institutions engaged in research projects that relate to historic trades, crafts, and tools and their impact on our lives. The numbers and amount of each grant is to be given at the discretion of a committee, with no one grant to exceed $2,000.

The 2009 grant supported a project on 18th and 19th century coopering in Virginia and New England. Previous grants have supported a wide variety of projects, and normally three or more grants are made each year. A complete list may be found on the EAIA web site.

The Early American Industries Association, established in 1933, preserves and presents historic trades, crafts and tools and interprets their impact on our lives. The Association comprises collectors, curators, historians, antiquarians, librarians, material culturists, and anyone who shares our interests.

The Application deadline for 2010 is March 15. For further information on the EAIA and the Research Grants Program, and to print the four-page application visit their web site, www.EAIAinfo.org or contact Ms. Justine Clerc, Lorleton Assisted Living, 22 West 14th Street, Apt. 129, Wilmington, DE 19805 (302) 652-7297.