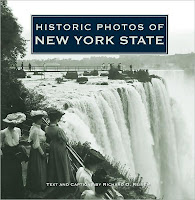 Richard Reisem’s new book, Historic Photos of New York State showcases striking black-and-white images that take you on a journey through New York State during the unforgettable landmark epochs of the Civil War, Prohibition, and the Great Depression. Other historic subjects depicted include the 1939 World’s Fair, the age of the industrialists, the Pan-American Exposition at Buffalo, European immigrants who disembarked at Ellis Island, the Grand Union Hotel at Saratoga Springs, the State Capital at Albany, Niagara Falls, and more.

Among the photographers represented in the Historic Photos of New York State are Matthew Brady, John Collier, Carl Dietz, Arnold Genthe, Lewis Wickes Hine, Listte Model, Arthur Rothstein, Alfred Stiglitz and others. The range of New York experience from 1850 to 1967 is covered in nearly 200 images drawn from around the state.

The author is a former trustee of the Landmark Society of Western New York, and has served on the board of trustees of the Rochester Historical Society. For sixteen years he served on the Rochester Preservation Board and was chair for four years- he spent 31 years at Eastman Kodak.

The book is published by Turner Publishing.