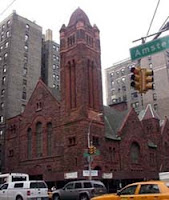 On Tuesday, the New York City Landmarks Preservation Commission voted to designate the West Park Presbyterian Church at 165 West 86th Street on the corner of Amsterdam Avenue as an individual New York City landmark. This move to protect this late 19th-century chapel and church came after decades of activism by concerned neighbors. Originally included in the proposal for the Upper West Side/Central Park West Historic District, the church was left out of the 1990 district designation after opposition from church representatives. Since then, neighbors have had to stave off development proposals and demolition permits, most recently observing workers last year removing pieces of West-Park’s interior (it was reported that church was cleaning up from a burst pipe).