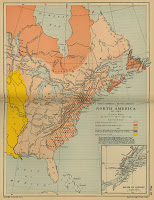 The North Atlantic Conference on British Studies will meet in Baltimore, Maryland, from November 12-14, 2010. The Program Committee of the NACBS welcomes participation by scholars working on all aspects of the British empire and the British world. They invite panel proposals addressing selected themes, methodology, and pedagogy, as well as roundtable discussions of topical and thematic interest, including conversations among authors of recent books. North American scholars, international scholars, and graduate students are all encouraged to submit proposals to the NACBS Program Committee.

Strong preference will be given to complete panel or roundtable proposals that consider a common theme. Panels typically include three papers and a comment- roundtables customarily have four presentations. Individual paper proposals will also be considered in rare cases. Those with single paper submissions are strongly encouraged to search for additional panelists on lists such as H-Albion or at venues such as the NACBS Facebook page.

Applicants may also write to the Program Chair for suggestions (nacbsprogram@gmail.com).

Committed to ensuring the broadest possible participation of scholars in British Studies, the Program Committee will give priority to those who did not read papers at the 2009 meeting. Panels that include both graduate students and established scholars are encouraged, as are submissions with broad chronological focus and interdisciplinary breadth.

All submissions must be received by March 1, 2010. For details, directions, and online submission, see www.nacbs.org/conference.html or contact Lara Kriegel, Program Chair, at nacbsprogram@gmail.com.

Photo: French Expansion and British Conquests in North America to 1763.