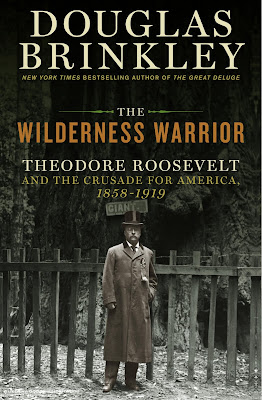 A new book on Teddy Roosevelt by New York Times bestselling historian Douglas Brinkley is described by the publisher as &#8220a sweeping historical narrative and eye-opening look at the pioneering environmental policies of President Theodore Roosevelt, avid bird-watcher, naturalist, and the founding father of America’s conservation movement.&#8221 For those interested in the Adirondack region, this new biography

Brinkley draws on never-before-published materials for his look at the life of what he calls our &#8220naturalist president.&#8221 Launching from conservation work as New York State Governor, TR set aside more than 230 million acres of American wild lands between 1901 and 1909, and helped popularize the conservation of wild places.

Brinkley’s new book singles out the influential contributions of James Audubon, Charles Darwin, and John Muir in shaping Roosevelt’s view of the natural world. Some of the most interesting parts of the book relate to TR’s relationship with Dr. C. Hart Merriam, who reviewed the future president’s The Summer Birds of the Adirondacks in 1877- Merriam’s own The Mammals of the Adirondacks Region of Northeastern New York, published in 1884, was duly praised by TR.

Merriam and Roosevelt later worked successfully to reverse the declining Adirondack deer population (they brought whitetail from Maine), and to outlaw jack-lighting and hunting deer with dogs and so helped establish the principles of wildlife management by New York State.

During his political stepping-stone term as 33rd Governor of New York (1899-1900) TR made the forests of the state a focus of his policies. He pushed against &#8220the depredations of man,&#8221 the recurrent forest fires, and worked to strengthen fish and game laws. Roosevelt provided stewardship of the state’s forests and the Adirondack Park in particular, that led to the most progressive conservation and wilderness protection laws in the country.

TR also worked to replace political hacks on the New York Fisheries, Game, and Forest Commission (forerunner of the DEC), according to Brinkley, and replaced them with highly trained &#8220independent-minded biologists, zoologists, entomologists, foresters, sportsman hunters, algae specialists, trail guides, botanists, and activists for clean rivers.&#8221 To help pay the bill he pushed for higher taxes on corporations while also pursuing a progressive politics &#8211 what Brinkley calls &#8220an activist reformist agenda.&#8221

The book ranges with Roosevelt to Yellowstone, the Blue Ridge Mountains, the Dakota Territory, and the Big Horn Mountains. It does capture Roosevelt’s time in the Adirondacks, but its’ strength is in putting that time into the larger context of Roosevelt’s life as a wilderness conservationist. For example, TR’s opposition to the Utica Electric Light Company’s Adirondack incursions is only mentioned in passing, though Brinkley’s treatment of the relationship between Gifford Pinchot and TR is more developed. An index entry &#8211 &#8220Adirondack National Park&#8221 &#8211 is lightly misused bringing into concern how much Brinkley really appreciates the impact of Roosevelt’s Adirondack experiences (both in-country and in Albany) on his wilderness ethic.

All in all, however, Wilderness Warrior is a well written collection of the strands of Roosevelt’s conservationist ideas, woven into a readable narrative. Considering TR’s role in so many disciplines related to our forests, that’s no mean feat.

Looking for things to do in NY? Check out Citypath