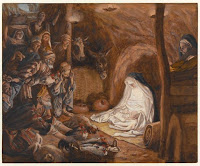 Many of the iconic watercolors illustrating the New Testament by 19th-century French painter James Tissot, including many images related to the Nativity are on view at the Brooklyn Museum only through January 17, 2010. James Tissot: The Life of Christ includes 124 watercolors, selected from a complete set of 350 in the Museum’s collection. It marks the first time in over twenty years that any of these images have been on public view, in large part because of the extreme fragility of watercolors.

Among the scenes related to the birth of Christ that are included in the exhibition are The Annunciation, Saint Joseph Seeks a Lodging in Bethlehem, The Birth of Our Lord Jesus Christ, The Magi Journeying, and The Adoration of the Shepherds.

Born in France, James Tissot (1836-1902) enjoyed a successful career as a society painter in London and in Paris before experiencing a religious vision, after which he began the ambitious project of illustrating the life of Christ, an undertaking that took a decade. It resulted in carefully researched, detailed images that were widely exhibited before rapt audiences in Europe and the United States.

In 1900, at the urging of John Singer Sargent, the entire series was acquired by the Brooklyn Institute of Arts and Sciences, the precursor of the Brooklyn Museum, for the then huge sum of $60,000. The significant acquisition increased by several times, the then small art collection of the fledging museum.

A selection of images from the exhibition, including several of the Nativity-related watercolors, is available for press use.