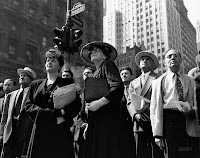 The New-York Historical Society is soliciting donations of materials relating to the impact of World War II on New York City. They are interested in snapshots of armed forces personnel (particularly leaving and returning to the city), photographs of victory gardens, women in the work force, minority communities, and locations in the city that relate in some way to the war effort. They would also like to receive soldier’s diaries that include descriptive passages about the city or the war experience, vivid and distinctive letters to or from New Yorkers and ephemeral material such as posters, broadsides, propaganda pamphlets, menus, programs, etc. All items should be identified clearly with names, dates, and locations, when known.

Please DO NOT send materials directly to them. They can only handle a limited number of items and cannot return unwanted material to donors. Instead, submit descriptions of what might be of interest with scans or photographs, if possible to wwii@nyhistory.org.

The New-York Historical Society will not be able to accept magazines, newspapers, newspaper clippings or material that is in poor condition (i.e., dirty, moldy, unreadable) or outside the scope of our collection. Materials selected by the staff may be used in the Society’s upcoming (2012) exhibition on World War II in New York- some may be added to our permanent collections- some may appear on web presentations.