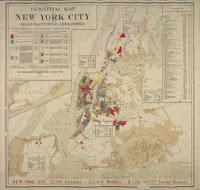 A New York Public Library exhibit will look at the history of New York City’s shoreline. The exhibit, entitled Mapping New York’s Shoreline, 1609-2009, will run until June 26, 2010 at the D. Samuel and Jeane H. Gottesman Exhibition Hall (First Floor) of the Stephen A. Schwarzman Building, 5th Avenue and 42nd Street.

September 2009 marks 400 years since Henry Hudson sailed into New York Harbor and up the Hudson River, almost to what is now Albany, performing detailed reconnaissance of the Hudson Valley region. Other explorers passed by the outwardly hidden harbor, but did not linger long enough to fully realize the commercial, nautical, strategic, or colonial value of the region.

Once the explorers returned to Europe, their strategic information was passed on to authorities. Some data was kept secret, but much was handed over to map makers, engraved on copper, printed on handmade paper, distributed to individuals and coffee-houses (the news centers of the day), and pored over by dreamers, investors, and potential settlers in the “new land.”

Mapping New York’s Shoreline celebrates the Dutch accomplishments in the New York City region, especially along the waterways forming its urban watershed, from the Connecticut River and Long Island Sound to the North (or Hudson) River and the South (or Delaware) River. Inspired by The New York Public Library’s collection of Dutch, English, and early American mapping of the Atlantic Coastal regions, this exhibition exemplifies the best early and growing knowledge of the unknown shores along our neighboring rivers, bays, sounds, and harbors.

From the earliest mapping reflecting Verazzano’s brief visit to gloriously decorative Dutch charting of the Atlantic and New Netherland, illustrating their knowledge of the trading opportunity Hudson’s exploration revealed, the antiquarian maps tell the story from a centuries-old perspective. We are brought up to date with maps and text exploring growing environmental concern for this harbor, and the river that continuously enriches it. From paper maps to vapor maps, those created with computer technology, the story of New York Harbor in its 400th year is told.