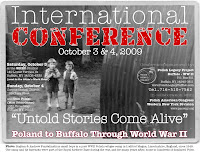 The Polish Legacy Project in Buffalo will be hosting a conference, &#8220Poland to Buffalo Through WWII: Untold Stories Come Alive&#8221 in that city on October 3rd and 4th. The aim of the conference is to highlight the stories of Polish WWII survivors who settled in Western New York as a result of the war. This is the first time an event such as this has been organized in the 60 + years that these survivors have been in this country. Up until now, they have kept their experiences to themselves and their children, speaking about them almost exclusively in Polish.