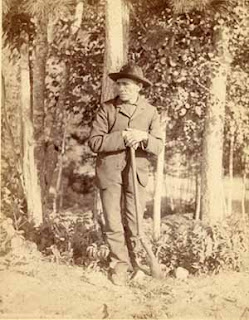 As part of the lead-up to Abenaki Day at the Adirondack Museum, Christopher Roy (a cultural anthropologist engaged in research related to historically known Abenaki people) penned a few short articles with Abenaki family historian David Benedict may be if interest to New York History readers.

Roy is a 1995 graduate of the University of Vermont. He is completing a PhD program in the Department of Anthropology at Princeton University. Of particular interest to his research are the histories of residence off reserve, questions of law and belonging, as well as the work of family historians in understanding Abenaki pasts, presents, and futures.

The first one, focusing on Dan Emmett and a canoe he built which is in the collections of the museum, has been posted by the Adirondack Museum http://www.adkmuseum.org/about_us/adirondack_journal/?id=156. Another of these short articles was published in the News Enterprise of North Creek [link]. This one focused on John Mitchell, an Abenaki man who lived most of his life at Indian Lake.

The Adirondack Museum has posted a few of them on their Adirondack Journal:

On Monday, July 20, 2009 Roy will discuss aspects of his research in a program entitled &#8220Searching for Sabattis, and Other Tales of Adirondack Abenaki Adventure &#8221 at the Adirondack Museum at Blue Mountain Lake, New York. Part of the museum’s popular Monday Evening Lecture series, the presentation will be held in the Auditorium at 7:30 p.m. There is no charge for museum members. Admission is $5.00 for non-members.

One thought on “History and Culture: Background For Abenaki Day”