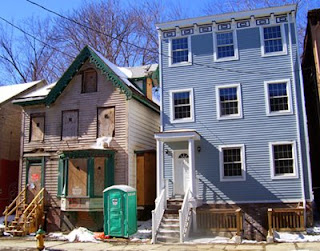 New Yorkers could find it more affordable to make repairs on older homes after the New York State Senate unanimously approved a bill that would improve the existing but underutilized New York State Rehabilitation Tax Credit programs. The same bill passed the Assembly in June, and now awaits the signature of Governor David Patterson.

An economic impact study recently conducted by HR&A Advisors of New York projects that the rehabilitation tax credit will spur over $500 million dollars of economic activity in New York State and create some 2,000 jobs over its five-year lifespan. The measure (S.6056-Valesky/A.9023-Hoyt) provides incentives and program features for developers and municipalities seeking to rehabilitate historic buildings, and is hoped to serve as a &#8216-Smart Growth’ initiative.

&#8220We feel this program will prove one of the most effective economic and community development programs in the state, directing significant private investment to the State’s economically distressed municipalities and neighborhoods&#8221 said Jay DiLorenzo, President of the Preservation League of New York State. Similar programs in other states have served to provide critical gap financing for rehabilitation projects.

New York’s first-ever rehabilitation tax credit was adopted as Chapter 547 of the Laws of 2006, but limitations of both the commercial and residential programs failed to provide sufficient incentives to deliver economic and community revitalization to municipalities in need.

&#8220An expanded rehabilitation stimulus program is needed to encourage re-use of existing infrastructure, address affordable housing needs, and stimulate new private investment in the redevelopment of urban cores,&#8221 said DiLorenzo. &#8220Because this bill is fiscally sound while promoting economic stimulus, we urge Governor Paterson to sign this revised legislation and to deliver a program that can fuel the revitalization of New York’s downtowns and neighborhoods.&#8221

One thought on “Enhanced Preservation Tax Credits Approved by Legislature”