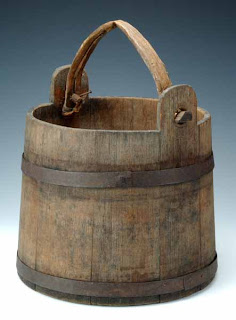 Coopering is the ancient art of making casks, barrels, vats, buckets, and other circular or elliptical wooden vessels bound together by hoops. Historically, wooden barrels were used for the storage and transportation of all sorts of goods. Coopering was a valuable skill. David Salvetti will demonstrate the art of coopering at the Adirondack Museum at Blue Mountain Lake on July 18, 19 and 20, 2009. The demonstration will be held in the Mark W. Potter Education Center from 10:00 a.m. until 4:00 p.m. and is included in the price of general admission.

David Salvetti’s love of woodworking began at age seven &#8211 with simple
projects such as birdhouses. In 2005, at the age of fourteen, woodworking became something more. The Salvetti family visited the Adirondack Museum in July of that year. The rustic furniture on exhibit fascinated David. Inspired by what he saw, Salvetti cut a sapling on the family’s property and built a twig chair. Another chair
followed in 2006 &#8211 winning &#8220Best in Show&#8221 (4-H Youth Division) at the Oswego County Fair. David entered the white birch chair in the 2007 New York State Fair, Adult Arts and Crafts competition &#8211 winning another blue ribbon. David’s prize-winning rustic chair is on display at the Adirondack Museum and will become part of the permanent collection.

David Salvetti’s exploration of traditional woodworking techniques has led him to build his own shed, making shingles to cover the structure by hand. He has learned to make watertight wooden buckets without nails, adhesives, or modern sealants. He demonstrates his skills at Fort Ontario State Historic Site in Oswego, N.Y.

Coopering is part of a summer-long series of craft and trade demonstrations at the Adirondack Museum. To see a complete listing, visit the museum’s web site www.adirondackmuseum.org and click on &#8220Special Events.&#8221