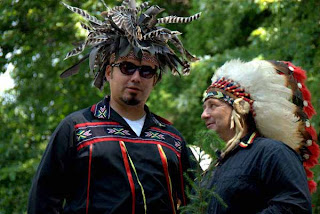 Abenaki is a generic term for the Native American Indian peoples of northern New England, southeastern Canada, and the Maritimes. Members of the Abenaki Watso family will share the traditions, culture, and heritage of their ancestors at an upcoming event at the Adirondack Museum this Saturday, July 11, 2009. These Native Peoples are also known as Wabanaki (Eastern Abenaki &#8211 Maine and the Canadian Maritimes) or Wobanakiak (Western Abenaki &#8211 New Hampshire, Vermont, and southeastern Canada). In the Native language Wobanakiak translates roughly to mean &#8220People of the Dawn.&#8221

A majority of the Watso family who will demonstrate or present at the Adirondack Museum are from the Odanak reserve in the province of Quebec. The Abenaki Nation at Odanak, historically called the St. Francis, is now called the Odanak Band by the Canadian government.

Rejean Obomsawin will share traditional Abenaki legends that have been passed down by the elders at 11:30 a.m. and 2:30 p.m. Rejean is a singer, drummer, and guide at the Musee des Abenaki at Odanak.

Christopher Roy is completing a PhD program at Princeton. Of particular interest to his research are the histories of residence off-reserve, questions of law and belonging, as well as the work of family historians in understanding Abenaki pasts, presents, and futures.

The Watso family has strong ties to the Adirondack region. Their ancestors include Sabael Benedict and his son Elijah, Abenaki men familiar to early settlers and explorers of the region, and Louis Watso an Abenaki man well known in the southern Adirondacks in the latter half of the 19th century.

Descendants Sabael Benedict and Louis Watso lived throughout the region, some as full-time residents and others moving back and forth between villages like Lake George and Saratoga Springs and Odanak, an Abenaki village on the lower St. Francis River in Quebec.

This branch of the Watso family also descends from John and Mary Ann Tahamont, basket makers who spent many summers at Saranac Lake around the turn of the last century.

One thought on “Abenaki Day at The Adirondack Museum”