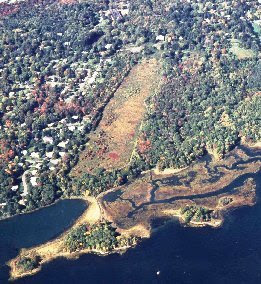 Owners of the historic Jay Estate in Rye and their families shared a passion for the water and were influential members of the New York sailing community: John Clarkson Jay was one of the founders of the historic New York Yacht Club, owner of the yacht, &#8220La Coquille&#8221 and a consultant to Commodore Matthew Perry following his 1852 -54 Expedition to Japan- the Van Norden patriarch, a member of the Holland Society, was one of the original organizers of the 1909 Henry Hudson Tercentenary that celebrated New York’s most vital waterway while applauding the contributions of European culture to this state’s development and commerce- Edgar Palmer, famed Princeton philanthropist, owned several famous yachts including two schooners named &#8220Guinevere&#8221 that were legendary for their state of the art technology—both vessels were commissioned to the US Navy in World War I and World War II for special escort patrol.

The exhibit explores the rich history of yachting in New York and features the same pristine view of Long Island Sound from the 1838 Jay mansion that inspired these sailing families when they lived in Rye. Among the unique items are extensive collections of 1909 Hudson Fulton Tercentenary memorabilia including post cards, banners, silver and bronze medals for the 1909 Commission- original engraved invitations, programs and silverware from Tiffany’s- vintage photographs of the 1909 naval parade- 100 year old ship plans of the replica Half Moon and Clermont- maritime photographs from Mystic Seaport’s unparalleled Rosenfeld Collection- an original 1916 scrapbook documenting the very first of the NY 40 design regattas from Long Island Sound all the way to Marblehead and more.

The exhibit is just one reason to visit the site. According to the JHC website: 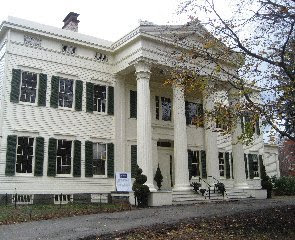 The Jay Property in Rye is the boyhood home of New York State’s only native Founding Father, John Jay (1745-1829). Located next to a marshlands preserve with public trails, this sylvan and historic 23 acre park is all that remains of the original 400 acre Jay family estate where America’s first Chief Justice of the Supreme Court and author of The Jay Treaty grew up. Located just 35 minutes from Manhattan, the Property has an 8000 year old scenic vista of Long Island Sound over a meadow bordered by sunken stone ha-ha walls, a European garden design feature added by Jay’s eldest son circa 1822. It is also located on the historic Boston Post Road where mile marker “24” out of 230, designated in 1763 by Jay’s colleague, Benjamin Franklin, is set into the perimeter wall.

The centerpiece of this National Historic Landmark is an 1838 Greek Revival mansion with soaring Corinthian columns built by Peter Augustus Jay atop the footprint of his father and grandfather’s original home “The Locusts” reusing original timbers and nails from the same house. Visitors can literally see the layers of history being uncovered here. The PA Jay House is being carefully restored and managed by the not-for-profit organization, the Jay Heritage Center (JHC) for use as an educational facility hosting Programs in American History, Social Justice, Landscape Conservation and Environmental Stewardship. The house is an official project of the Save America’s Treasures Program and at 170 years old, it is the oldest National Historic Landmark structure in New York State to be using an energy efficient geothermal heating and cooling system. It was recently designated as an important site in the Hudson River Valley Heritage Area list because of its architectural significance and best green management practices.

The African American Heritage Trail of Westchester County lists the Jay property as one of 13 significant sites worth visiting. John Jay is well known for advocating emancipation, serving as President of the Manumission Society and establishing the first African Free School.

Visitors to our National Historic Landmark site see and learn about:

-an 8000 year old Paleo Indian viewsshed of Long Island Sound &#8212- arrowheads and pottery have been found by archaeologists on this site revealing a rich cultural heritage. See the oldest managed meadow on record in all of New York State, an unparalleled scenic view!

-the land where the only Founding Father native to New York grew up and is buried with his descendants- John Jay learned to ride her in Rye as a boy, developing his lifelong love of nature- the Jay Property was a refuge he returned to time and again to be with parents, his son and grandchildren. It is here that Jay’s character was shaped, and led him to serve in every branch of government including first Chief Justice of the Supreme Court of the United States and Governor of New York.

-the landmarked Boston Post Road with its mile marker placed by Benjamin Franklin- a stretch of road distinguished by three pre- Civil War architectural gems, Whitby, Lounsberry and the 1838 Jay Mansion, all intact in their landscapes.

-a magnificent 170 year old Greek (and &#8220green&#8221) Revival Building that is an official Save America’s Treasures project and also the oldest NHL in all of New York State with a working geothermal heating and cooling pump system, and the first NHL in Westchester County to use such a sustainable system

Photos: The 1838 Jay Mansion and an Aerial View of Jay Property and Neighboring Nature Sanctuary.