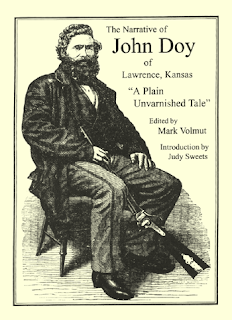 
John Doy, a physician from Rochester, New York, heeded the call from abolitionist societies and moved to Kansas in July 1854. A full-bearded and serious-looking man, Doy helped found the town of Lawrence and built a house on its outskirts, where his wife and nine children joined him. As a bastion of free-soil sympathies, Lawrence became a target of pro-slavers, who sacked it on May 21, 1856. In retaliation, the abolitionist firebrand John Brown and his men murdered five slave owners near Pottawatomie Creek. Three months later Doy fought alongside Brown in a pitched battle at Osawatomie, 60 miles southeast of Lawrence.

Kansas became increasingly dangerous for African Americans, so on January 18, 1859, a group of Lawrence’s citizens raised money to help blacks move to safety. Brown offered to take one group north to Canada and did so without incident. Doy also volunteered to help by taking another group about 60 miles northwest to the town of Holton, the first step on the road to Iowa. His passage proved less fortunate.

Among the African Americans on Doy’s expedition were Wilson Hayes and Charles Smith, cooks at a Lawrence hotel. Doy knew that both of them were free men, although they had no papers. All the others had their “free papers,” including William Riley, who had been kidnapped once before from Lawrence but had managed to escape.

The piece offers an interesting look at one of teh many upstate New Yorkers who traveled west during the Kansas-Missouri Border War.