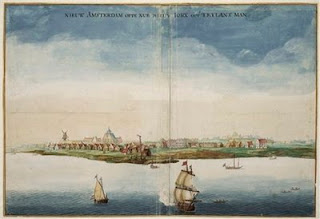 A new exhibit “Amsterdam/New Amsterdam: The Worlds of Henry Hudson” opened Saturday at the Museum of the City of New York and will run through September 27, 2009. Presented in collaboration with the New Netherland Institute, Albany, and the National Maritime Museum Amsterdam / Nederlands Scheepvaartmuseum Amsterdam, the exhibit will employ rare 16th- and 17th-century objects, images, and documents from major American and Dutch collections to bring the transatlantic world to life and reveal how Henry Hudson’s epic third voyage of exploration planted the seeds of a modern society that took root and flourished in the New World. Focusing on the economic, cultural, and ideological connections that ultimately linked two global cities, Amsterdam and New York, “Amsterdam / New Amsterdam” will illuminate not only the global significance of Hudson’s voyage, but also the creative context out of which the exploration and settlement of New York itself arose, highlighting the Dutch role in creating the very character of New York as a place of opportunity, tolerance, and perpetual transformation.

One thought on “Amsterdam / New Amsterdam: The Worlds of Henry Hudson”