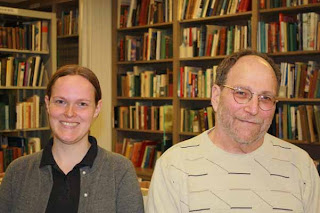 The Adirondack Museum at Blue Mountain Lake has announced the appointment of Melissa Tacke as Project Archivist to describe and arrange the collections of personal papers belonging to two of the founding fathers of the Adirondack Park Agency: Clarence Petty and Richard Lawrence.

The Clarence Petty Papers consist of correspondence, subject files, memoranda, aviation and weather records, newspaper clippings, government documents, books and other publications, audio recordings, memorabilia, awards, photographs, and 62 maps. These records document Clarence Petty’s long career with the Conservation Department and the Department of Environmental Conservation, as well as his influential role in the creation of the Adirondack Park Agency and the Adirondack Park Land Use Master Plan.

The papers also reflect Petty’s relationship with contemporary environmentalists, environmental organizations and government agencies, and his position as an authority and spokesman on environmental issues throughout the country. The collection dates from circa 1939 through 2006. Clarence Petty donated the papers to the Adirondack Museum in November 2006.

The Richard Lawrence Papers consist of correspondence, subject files, memoranda, notes, publications, books, government documents, memorabilia, awards, and photographs. They document Richard Lawrence’s work as a member of the Temporary Study Commission on the Future of the Adirondacks and as the founding Chairman of the Adirondack Park Agency. The records date from the mid 1960s to the 1990s and were donated to the museum by the Lawrence family in 2006.

Tacke’s position has been funded by a grant in the amount of $9,669 from the New York State Archive’s Documentary Heritage Program. The Documentary Heritage Program (DHP) is a statewide program established by law in 1988 to ensure the identification, sound administration, and accessibility of New York’s historical records. The DHP provides grants to not-for-profit organizations in New York State that collect, hold, and make available historical records. Tacke will work in the Adirondack Museum’s research library from April 6 through June 30, 2009 under the terms of the grant.

Melissa Tacke holds three degrees from SUNY Albany. Her Bachelor’s degree was awarded for a double major in Women’s Studies and Africana. She holds one Master’s degree in Women’s Studies and a second in Information Studies. She is a native of Lawrence, Kansas. Tacke comes to the Adirondack Museum following nearly a year of work at Bennington College, Bennington, Vermont as a Project Archivist, funded by a Getty Campus Heritage Grant. She also served as a Digital Images Archivist.