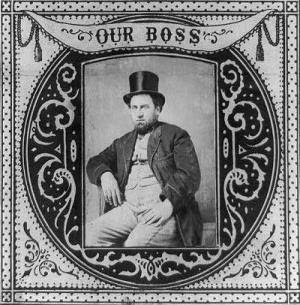 
In many respects, a nineteenth century story of David and Goliath. The legendary politician, Boss Tweed, effectively controlled New York City from after the Civil War until his downfall in November 1871. A huge man of almost 300 pounds, he and his Ring of Thieves appeared to be invincible as they stole an estimated $30 to $200 million—up to $2 billion in today’s dollars.