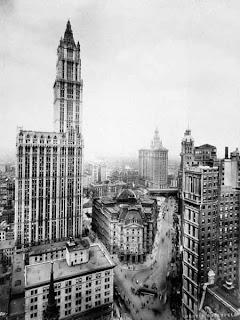 The New York Times is reporting on a new book by Gail Fenske, a professor of architecture at Roger Williams University: The Skyscraper and the City: The Woolworth Building and the Making of Modern New York.


On the evening of April 24, 1913, President Woodrow Wilson pressed a tiny button inside the White House, lighting up the Woolworth Building in Manhattan. It was “the tallest structure in the world, with the one exception of the Eiffel Tower in Paris,” The New York Times reported, and it was a marvel of architecture and engineering.

Of course, the Woolworth Building has been surpassed in height — by the Chrysler Building in 1930 and by the Empire State Building in 1931 — and it has at times seemed to recede into the fabric of Lower Manhattan. The building’s owners at one point considered converting the building into luxury apartments, but now the structure is being refurbished as top-end offices.

The book places the Woolworth Building in the context of its time and place: the booming commercial culture of early 20th century New York- the often unsettling experience of modernization- advances in technology and communications- and a new phenomenon of “urban spectatorship” that made skyscrapers sources of public wonder and admiration.

Many innovations set the Woolworth Building apart. It contained a shopping arcade, health club, barber shop, restaurant, social club and even an observatory. Its use of technology — including an innovative water supply system, a electrical generating plan, high-speed electric elevators providing both local and express service and what Professor Fenske calls “the first prominent use of architectural floodlighting in the world” — also set it apart. So did the construction process, run by the builder Louis Horowitz of the Thompson-Starrett Company, who managed to avoid labor conflict, rationalize the building process and set a record for speed — paving the way for the famously rapid completion of the Empire State Building nearly 20 years later.

The building has survived the Woolworth Corporation itself. The company announced in 1997 that it would close its remaining discount stores. The company was renamed the Venator Group, began focusing on athletic wear, and since 2001 has done business under the Foot Locker name. Although there are no longer Woolworth’s stores in the United States, the Woolworths Group, a former subsidiary of the American company, continues to operate hundreds of retail stores in Britain.