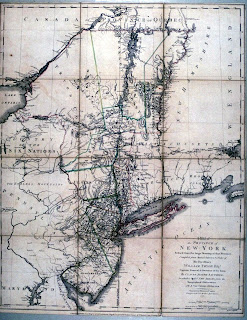 
In 1766, Samuel Kirkland, an American missionary, began living with the Oneida. He adopted many of their customs, but at the same time preached Christian ways. He was largely responsible for persuading the Oneida to abandon their neutral stance and support the Americans. Skenandoah, who was a close personal friend to Samuel Kirkland, began sending some warriors to help the Americans.


This marks the site of the last home of SKENANDOAH Chief of the Oneidas, “The White Man’s Friend.” Here he entertained Governor DeWitt Clinton 1810, and many other distinguished guests, and here he died in 1816 aged 110. He was carried on the shoulders of his faithful Indians to his burial in the cemetery of Hamilton College, Clinton, NY, and laid to rest beside his beloved friend and faithful teacher Rev. Samuel Kirkland.

2 thoughts on “Skenandoah – Chief of the Oneida”