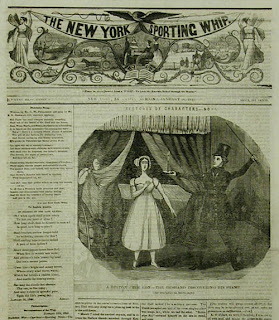 Like [Al] Goldstein’s Screw, the publishers [of long-forgotten sex rags from the early 1840s] chose titles that got right to the point: The Whip, The Rake, The Libertine, The Flash, and others with even shorter publishing lives. One of these, The New York Sporting Whip, offered a kind of mission statement: &#8220Man is endowed by nature with passions that must be gratified,&#8221 the newspaper asserted, &#8220and no blame can be attached to him, who for that purpose occasionally seeks the woman of pleasure.&#8221

The so-called &#8220father of the smutty papers&#8221 was William J. Snelling, a hard-drinking Bostoner who dropped out of West Point, hunted with the Dakota Indians, and helped found anti-slavery organizations. Inspired by a sex scandal involving a wealthy theater producer, Snelling launched The Sunday Flash in 1841 together with an eccentric minstrel singer named George Washington Dixon. They didn’t mince words: The theater producer in question, they wrote, was &#8220a hoary leper,&#8221 a &#8220Scoundrel whom even Texas vomited from her afflicted bowels.&#8221

The papers were an immediate hit. Newsboys hawked them for six cents apiece at ferry landings and oyster bars. Paid circulation averaged 10,000 to 12,000 per issue. Among the surefire circulation-building devices were in-depth reviews of the city’s hundreds of brothels. &#8220Princess Julia’s Palace of Love,&#8221 a story in the June 6, 1841, edition of a weekly called Dixon’s Polyanthos, depicted a popular brothel run by a fashionable madam named Julia Brown: &#8220On ascending the second story, up the splendid steps, you fall in, with apartment No. 1. This room is occupied by Lady Ellen, and a glorious lady she is, with the dark flashing orbs, and full of feeling—so full of intellect that one might stand and gaze, and gaze . . .&#8221

The full review is here.