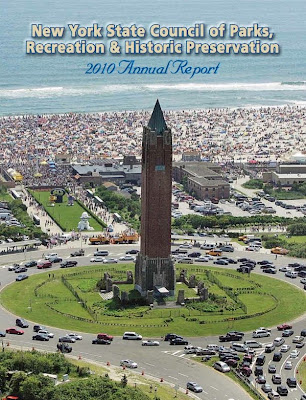 The 2010 State Council of Parks Annual Report has been released. The Council issues a report annually pursuant to Article 5.09 of the Parks, Recreation and Historic Preservation Law. The report provides a summary of regional activities and outlines the Council’s 2011 priorities.

The priorities for 2011 outlined in the report are:

1. Park Operations Funding – Keep Our Parks Open!
New York State must provide adequate funding to keep our 213 state parks open to the public and to provide safe, clean and affordable recreational and educational experiences to the 57 million people that visit our facilities each year.

4. Public-Private Partnerships.
The State Council and Regional Commissions will continue to help establish new “Friends Groups” – 16 new organizations have been started since 2007 – and to help strengthen existing Friends Groups to increase private support for state parks and historic sites. The State Council of Parks also continues to encourage partnerships with for-profit, non-profit and governmental entities for a wide range
of support, from direct monetary contributions and formal concession agreements to operations and programming. A list of such active and recent partnerships appears as an appendix to the report.

5. Private Fundraising Campaign.
During 2011 the State Council will continue to pursue private funding from individuals, corporations, and foundations – building upon the $5.6 million in private support that has been raised since 2009 to support the State Park System.

The full report can be viewed and downloaded as a pdf here: 2010 Annual Report.