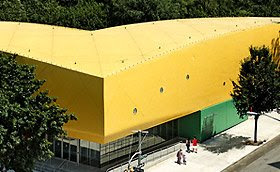 
The museum doubled the size of its city-owned building — with $48 million in city money and $32 million raised by the museum — to 102,000 square feet. As Robin Pogrebin reported in The Times in February, the project struggled through financial hardships. The museum itself lacked a strong physical identity, because most of its space has been underground since a 1977 design by Hardy Holzman Pfeiffer Associates created two lower levels. The greatly enlarged museum now hopes to improve its annual visitor total to 400,000 by 2010, from about 250,000 before the museum closed last September for the final stage of the renovation.