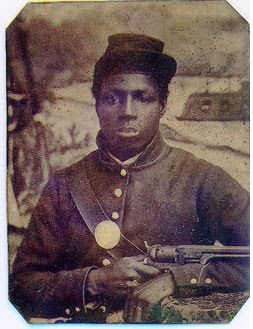 What follows is a guest essay by Bob Farrell, a researcher of the 123rd and 169th New York volunteer infantry regiments in the Civil War. This essay was inspired in part by New York History contributor Carol Kammen’s recent post on the life of Ira T. Brum, who enlisted in the 185th New York Volunteers in June 1864.

It was their country and they wanted to defend it. Their neighbors were enlisting and going to war, however, by law, that option was not available to them. Regardless of being free hard working citizens protecting their way of life, serving their country was denied to them. Despite this, all across upstate New York men of color went to a recruiting depot along with their neighbors to enlist in a regiment to be credited to their counties and their enrollment quota.

Stepping forward were James Brady from Malone, Ira Braum from Tompkins County, two step brothers from Fort Ann, Alonso Eddy from Owasco, and Bruce Anderson who in January 1865 would be awarded a Medal of Honor for his actions at Fort Fisher, North Carolina, stepped forward These are some names which have surfaced and been verified in the past few years.

The obstacle to identifying Blacks in all White regiments is the fact that nowhere in the regimental rosters provided by the Adjutant General for the State of New York is a racial distinction found. Mostly from postwar history have these names begun to emerge. Hopefully, with the current attention to the Civil War Sesquicentennial and the rising interest in the contribution of black troops to the success of Union victory, local historians and newspaper reporters will develop and further investigate and report on men of color.

Patriotism and a desire to defend the Union took the black man along with his neighbors to the recruiting tent. It is undeniable that the shade of his skin was a factor in being accepted into a company. In one example, three members of one family attempted to join the 169th New York Volunteers, one was accepted while the other two were sent to Riker’s Island which at that time was the training camp for the United States Colored Troops with the notation on their enlistment papers “of African descent”

For all those who successfully entered the military despite the shade of their skin, one thing is certain, their heritage was known to the other members of their company. For during the Civil War a company was a generally recruited from a specific town or region. Most of these towns, like today, were both rural and small. As anyone who grew up in one of these hamlets can tell you, everyone knows everyone and their business. With this in mind, no one served unobserved. Each man was accepted in his company and regiment not for his heritage, but for his commitment to serve in combat alongside his hometown neighbors.

Not until May 22, 1863 did General Order Number 143 establish a Bureau of Colored Troops to facilitate the recruitment of Black soldiers to fight for the Union Army. This bureau ultimately became known as the United States Colored Troops . From this simple beginning the USCT swelled to 170 regiments of approximately 178,000 members.

In the year 1862 there was no recognized means for a black to enlist. Emancipation was months away- plus any change in attitude by the Lincoln government was slow to emerge. Blacks remained in a limbo. The men in our story took history into their own hands and defied the government they were willing to defend. Let us hope that the clouds of history will clear and we will be able to enjoy more of their story of courage and determination